The Religion of Health: A Personal Healing Story 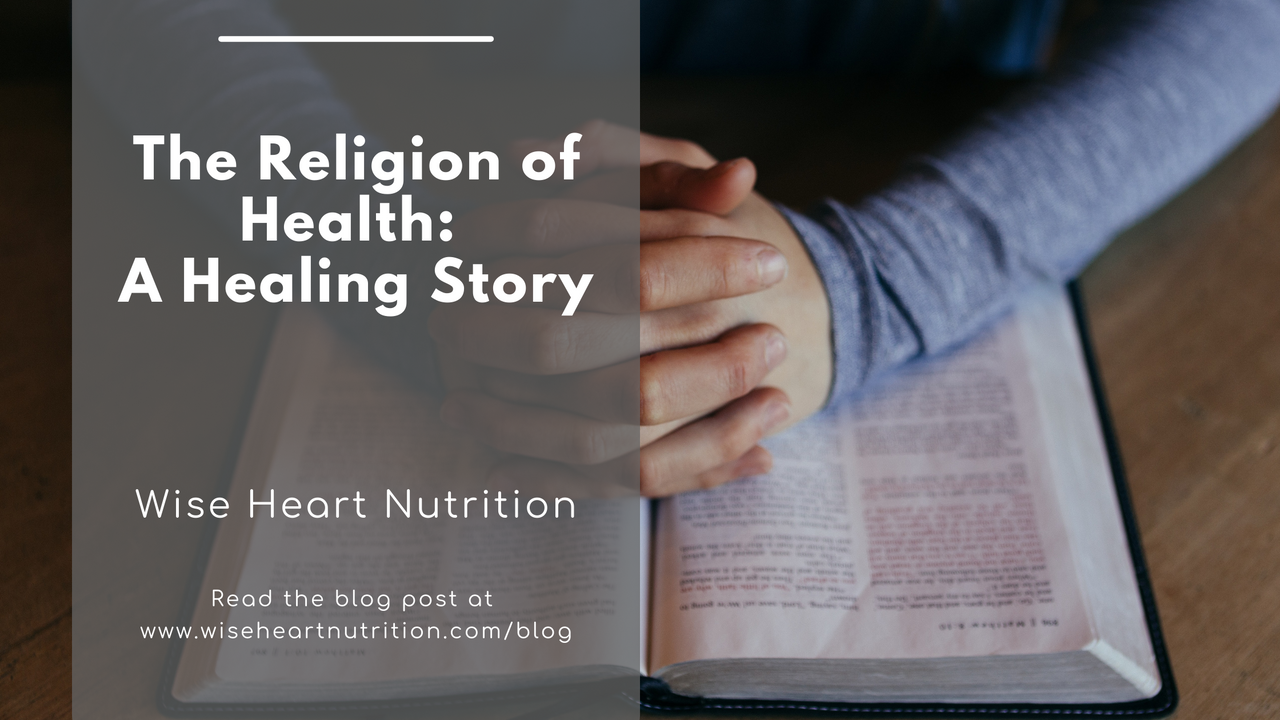 I was raised in the Southern Baptist church in North Carolina. I was a good Christian girl, of course.

As a good Christian girl, I followed the rules:

There are many pages I could write about the ideologies I was programmed with in my religious upbringing, and how they shaped my view of myself. However, I will keep this piece focused on the parallels I have noticed between religious messaging and disordered eating motivations/behavior. I also want to acknowledge that for many, religion is a safe and wonderful framework through which to live their life. Unfortunately, many aspects of my specific situation resulted in religion being harmful to me.

One of the most famous Christian beliefs is that “the body is a temple”, and that we must honor it as we honor God. Unfortunately, this line is vague and open to interpretation in many aspects. Anything from forbidding tattoos and piercings (but not ear piercings?) to the denial of added sugar can fall under this edict.

Then there’s the seven deadly sins, which include gluttony and sloth. There is also an aspect to religion in which suffering is glorified. It’s as if suffering is next to godliness - Jesus suffered and therefore, if you are suffering, you must be doing something right. If you feel that movement is forced and counting calories is mental torture, well you must be on the right track.

Through the interpretation of these ideologies, the physical body can become a representation of inner piousness. Weight gain could indicate lacking in the virtue of self-control or not honoring your body as God’s temple. In the same vein, the outward representation of modesty requires a strict dress code to prove to others that you are godly. Don’t show boobs, don’t show ass, don’t show too much leg, don’t wear anything too tight, always wear a cami underneath just in case.

Above all, religion taught me that humans are inherently evil and sinful, and not only did we have to be saved from ourselves, we had to deny all of our instincts in order to follow God.

As I grew older, a variety of factors began to influence my world view, and slowly chip away at my religious beliefs. I gained critical thinking skills, explored new perspectives, had relationships outside of my own religion, began questioning my sexuality, and experienced more direct harm from religious peers and institutions. By the age of 20, I had almost completely divested from my previous religious beliefs, but the internal programming remained. The voices of self-control and denial of pleasure still whispered in the back of my mind.

During this time, I chose to major in nutrition. It was an innocuous choice made out of curiosity, but soon, I found myself clinging to a new sort of religion - the religion of health.

I wanted answers and acceptance.

I transferred my search for identity and ingrained desire for morality into nutrition - specifically, plant-based and clean eating. This is not to say that I recognized what I was doing. Hindsight is 20:20, but at the time, I was just as confused as ever.

Here are some of the new rules that I followed as a good plant-based/clean eater girl (which I now realize were problematic food rules and signs of disordered eating):

As someone who lived in a college dorm, these rules usually meant I was limited to a short list of meals on a tight rotation. But I didn’t mind, because eating the same things all the time meant “more control”. However, that also meant I had to avoid certain social occasions and I could only eat at a handful of restaurants in my town.

Even so, I wore this self-imposed restriction and suffering with a badge of honor.

I was a good-nutrition-girl, on the straight and narrow. I had all the moralistic answers about food and “how to take care of myself”, and I made sure to tell everyone who would listen, so I could “save” them too. I had formed a community with similar eaters within my major. Every get-together would basically be a healthism echo chamber.

We would all report our recent clean healthy behaviors and pat each other on the back. We would talk about the newest “super food” we had bought and how it was changing our life, and how long we had worked out that day. I would leave these meetings either high on validation for my health performance or gutted with shame that I wasn’t doing good enough in comparison to my friends.

I tried to keep it up. I tried for 2+ years. But I just kept feeling like I was falling farther and farther behind, like I could never be as good or clean or healthy as others. This shame led to me eating “forbidden” foods in secret, like fried chicken, ice cream, and sour candies. And feeling so much guilt for living a lie. On the outside, I was still the good “healthy” girl who was admired amongst my friends and family, and who performed at the top of her class. On the inside, I was so confused and beginning to question everything again.

I thought I had left religion behind, but I realized that I had just shifted ideologies from spiritual control to physical control.

I had not truly discovered my own identity or voice, but drowned it out again with moralistic health messages and rules. Following rules was simple, but forging my own path, built on intuition and trust in my body that I only knew to deny - that seemed impossible.

As it turns out, it wasn’t impossible. Today, I have worked hard to understand how these experiences with both religion and disordered eating were intertwined for me. There’s the clear moralistic messages - righteous vs sinful and good vs bad; the sense of saving yourself and others from impending doom - the threat of hell and the fear mongering of the o— epidemic; similar ideologies around being clean as well as not being able to trust your body; and suffering being glorified as a sort of toxic performance.

I’ve learned (and unlearned) so much about the origins of religious and health messaging, specifically in American culture. This knowledge, as well as a lot of patience and compassion (and therapy), has granted me the space to truly trust not only myself, but my body as well. I can now disconnect health from morality, discover pleasure in food, and trust my instincts and innate body wisdom.

By letting go of these systems that I was taught to obey, I have gained both spiritual freedom and food freedom, and feel so much more joy and peace in my life.  I have come to find spirituality in other areas, and intentionally keep morality and doctrine far away from my plate.

Here are a few of the values I now use as a guide in my life (some related to food and spirituality, some not):

Rebecca is part of the nutrition therapy team at Wise Heart Nutrition, and is currently accepting new clients! You can learn more about her, and set up a free discovery call here.

Stay connected with news and updates!

You will get monthly emails with Anti-Diet, Intuitive Eating, and Body Liberation content, quarterly newsletters, blog post announcements, and occasional marketing emails (which you can easily opt out of)!

We will never share your information or send you spam!